camping is hard for me. in theory, i love it. in reality, it usually involves at least one meltdown prior to or during the excursion.

we made it! though i may or may not have sent a text to my mom from inside the tent at 2am, “SCARY NATURE NOISES WE’RE GOING TO DIE.”

because contrary to what my husband would like to believe, i can tell the difference between an owl’s hoot and the cry of a coyote.

(there was a coyote nearby.)

there were also lots of suspect twig-snappings and leaf-crunchings in the night, strongly indicating the presence of an angry ghost and/or “hash-slinging slash killer.” which, for the record, absolutely do exist. they are people with very large knives who sneak up to your tent and start slashing with said knives. you can’t get out in time to escape, so you get slashed up too; your blood and guts hashed up and slung everywhere in the gory madness. (no, i do not watch horror movies. can’t you tell my imagination doesn’t need any assistance?)

if all that wasn’t enough, i woke up exactly at midnight, having experienced a nightmare in which someone broke into our home to murder our cats while we were gone.

and unfortunately, my mom had texted me at that exact moment. in my groggy, nightmare-induced panic, the glow from my phone made it look like someone had set a light right outside our tent. naturally, i assumed we were to be murdered momentarily.

it really was a beautiful couple of days to go camping. these are probably the last of our warm days (highs in the low 70s F). i get cold very easily, so i’m thankful the low was only around 50 — “frigid,” in my body’s opinion, but nothing a few layers of clothing can’t ward off. i love the mild chill of fall before the weather turns to winter, when the chill is no longer crisp and pleasant, but settles into one’s bones instead.

there’s a stream that runs through the middle of this campground. it rarely gets more than two or three feet deep, and the water is just as clear as can be. it’s really beautiful. i enjoyed stepping out onto some large rocks and just sitting there as the water slowly trickled by around me.

as i took this picture, i realized that one of my rain boots is not actually waterproof anymore. 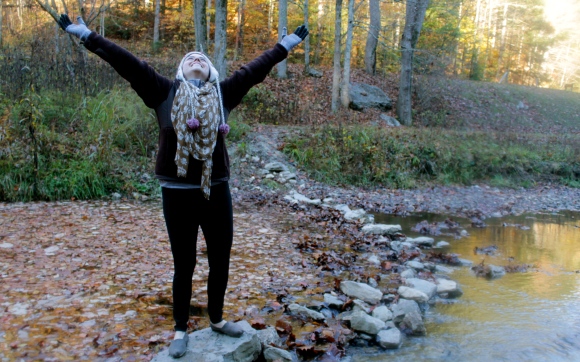 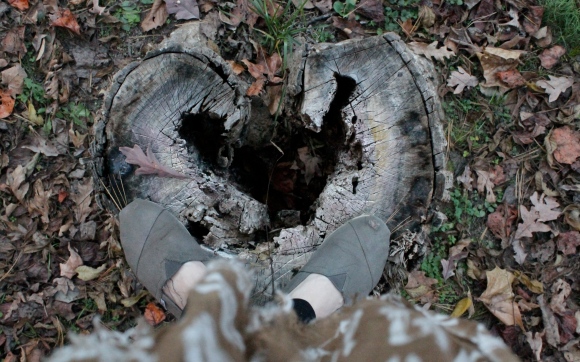 we made ourselves into sleeping bag burritos.

okay, you see what i have going on here? that pie (aka breakfast) over the fire pit? don’t ever do that. i was attempting to warm it, but i actually just smoked it. the result was still-cold, smoke-flavored cherry pie. smoked cherry pie is not delicious. it sounds like it maybe should be delicious, but it’s not. smoke is for pork and gouda, not tart cherries and cinnamon-crumble topping. live and learn.

until next time, wilderness. i am very happy to be back home with my soft bed and snuggle-cats.

7 thoughts on “SCARY NATURE NOISES; WE’RE GOING TO DIE (or, i went camping).”